I met up with my old work colleague in London yesterday for drinks.  The start didn't go too well as the place we chose didn't sell beer.  £20 later we found the Porterhouse which was great. 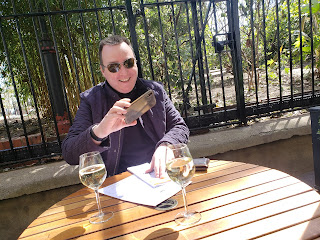 The West End was strange.  Most shops and things where open but it was terribly quiet.  A lot of the pubs that we would have liked to have gone in had no outdoor space so remained shut, but we managed to find a few that were open to keep us happy.  Another friend, Danny,  met us after work which was good.
Soho became largely pedestrianised after 5 but by then it was beginning to get cold.  We managed to brave it till around 8:30 but decided to call it as it wasn't much fun holding onto a cold pint shivering in the shade.