We've finally had the return of the party wall surveyors round the house this morning, we spotted a crack down the side of our house around a month ago which wasn't there when the building works started on the property next door a year ago.

The original survey was done before works started and mentioned no cracks.  The surveyor now needs to go back and look through photos before providing feedback as to whether the damage was directly the cause of next door's builders.

If it is then they will have to fix, however we've now lost all trust with them so will ask for money instead.  Fingers crossed we should have something by the end of next week.

In addition to this we've had another meeting with our architect Phil.  Here he showed us his final drawings with the proposed extension and internal walls removed. We should get these back in a few days so will post them up here then.  It's nice to feel a little bit of progress.

Now to speak to next door about our plans...

And found this beaut

Arwen's best impression of a cat

Urgh, the joy of owning a dog

The cleaners are about to arrive so when they do the kitchen I usually take Arwen up to the back garden to keep her out of their way.

Now that she's old enough to go for a walk I can take her a bit further.  I don't think she's going to like this.

I've got a nice waterproof coat that April bought for my birthday and have some new waterproof walking trainers, i'm still waiting on my new over trousers to complete the look.

Yesterday was a bad day 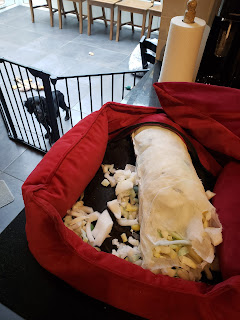 Behind bars where she belongs 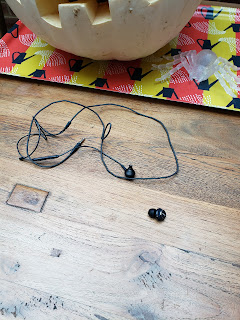 She climbed up onto the table and destroyed my headphones.  Luckily I found the missing bud.  Otherwise I may have found it a few days later... 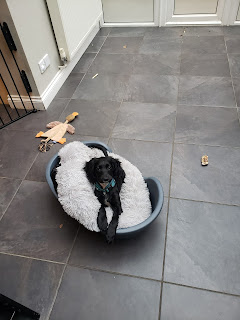 Butter wouldn't melt in her mouth.
No comments: 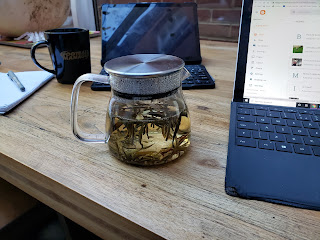 I bought a nice new one cup tea pot last week and some fancy teas to go with it.  This is a nice jasmine called Silver Needle.  Takes me right back to our honeymoon in Thailand.

We picked up this giant white pumpkin from a farmers market at the weekend, it nearly weighs as much as Flo. 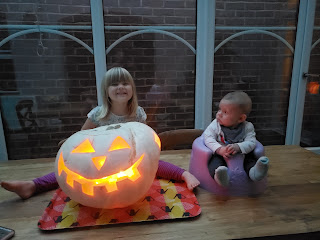 Flo chose the pumpkin, April designed it and I did the carving.  Arthur watched.
No comments:

But already thinking about my next holiday.  Or more precisely when will I go on holiday again.

I've got just less than 3 months to go on my current contract and other than 3 bank holidays that will be it for me as I can't see us going away anywhere between now and mid January.  I think we were lucky that neither Kent or the Hampshire were in a high risk area as we'd have to had cancelled.

As it was, we had to have a strange arrangement where although 7 of us went on holiday, only 6 were in the accommodation at any one time.  The parents (except April) had to timeshare to keep to the rule of 6.I had 2 days off (the kids), one with the dog, the other visiting a work friend.  The other parents each had a night in a hotel to themselves.  It did work out in the end but was a little convoluted.

There's no sign of covid restrictions lightening up anytime soon so doubt we'll be booking anywhere within the next 6 months.  If I remain fully employed the extra money is nice but I think we will all still need a break.  Another consideration is April goes back to work in February so may want to get her feet back under the table before we take a proper break.

We got back from our Forest Holiday holiday just before 12 on Friday and I went straight round our friends who kindly volunteered to look after Arwen.  Here's she is on the castle lawn having her first few walks.  We've had to wait a week after she had her final vaccination. 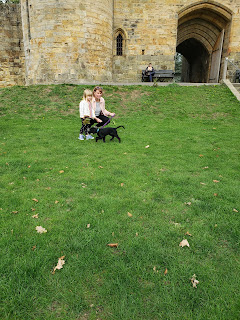 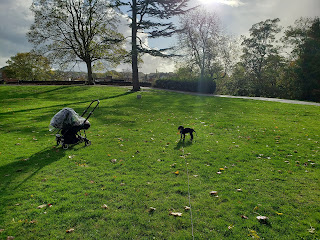 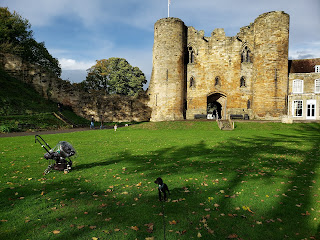 First train since lock down 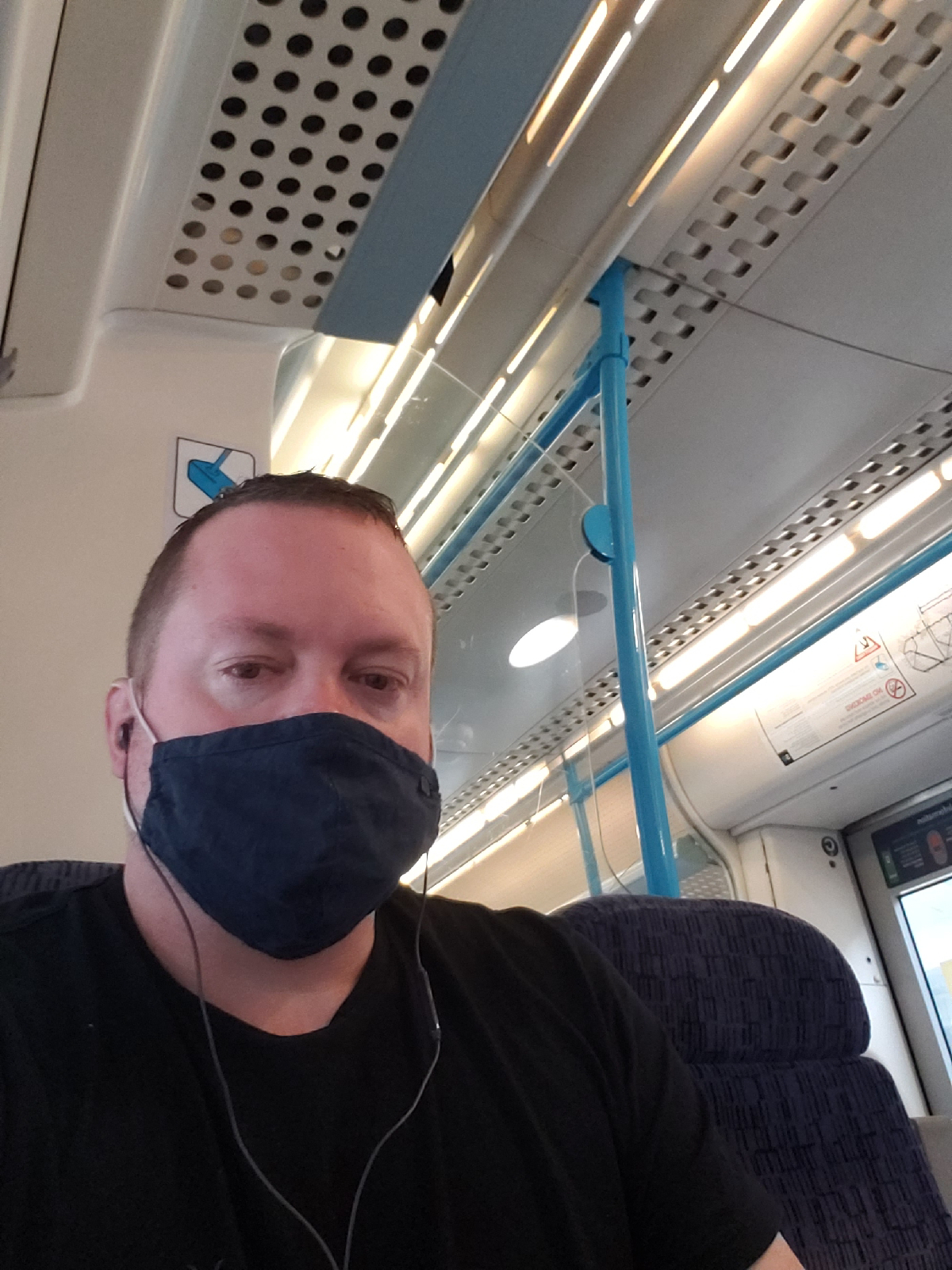 Off to Winchester to visit a friend
No comments:

Playing football manager and have come against an opposition player with the same surname as an ex work colleague who I disliked. A lot. He was a twat.
I've directed my team to "go in hard".
Am I wrong?
No comments: 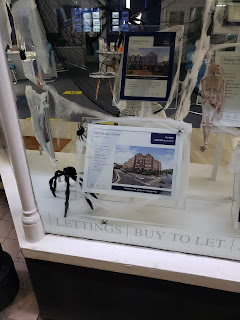 My large sparkly kickstarter D20 turned up last weekend.  Here it is in full glory. 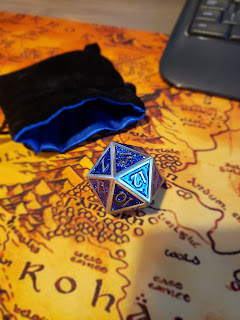 With Arwen still not toilet trained (or any type of trained) i'm still working from the kitchen.  This is the current office configuration. 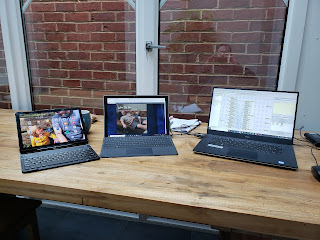 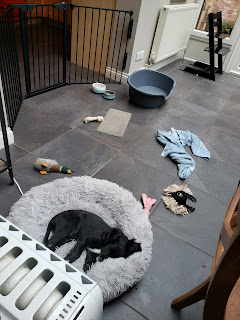 Dog sleeping by the portable radiator

We're off on holiday next week.  It'll be our first break since Rhosneigr (Anglesey) back in July.  We're going away with another family who has a daughter of a similar age to Flo, they used to go to the same childminder.  Unfortunately between us there are now 7 so we've had to be a bit creative with our meet.

I'm going to stay at home and look after Arwen for Monday and Tuesday then i'll get the train to Winchester and get picked up by April and will take me to the forest retreat (I must have done 10 of these at least by now), whilst April's doing that one of the other parents will stay over in a hotel who will the swap with the other for the final night.

It's all a bit convoluted due to the arbitrary due to the strict rule of six but I guess they have to draw a line somewhere and that's the number they chose.

Luckily rates in the south east and Winchester are still relatively low when compared to the North and other parts of the country so for the time being we're good to go.

Our friends have kindly volunteered to look after the dog, I think they were hoping she'd be toilet trained by then.  Good luck.

Flo (and Arthur) had their first restaurant curry this week.  And it went down well.  Flo especially liked the funny named crisps (poppadum) dipping in jam (mango chutney). 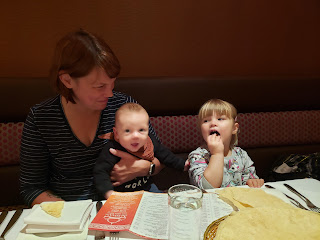 She's been pretty good eating out and rarely causes a fuss.  All part of the training so we can go away somewhere nice and not annoying other patrons.

God I was bored yesterday 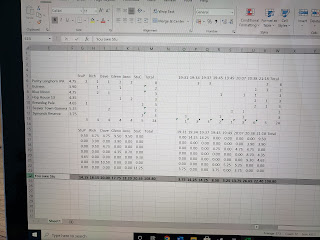 Bored at work yesterday so built a spreadsheet of who owed what from the previous nights pub outing.  Normally I would have just split it by 6 maybe adjusting by the fact that Stu had 3 and I had 5 pints.  But the data was there and with it all being waiter served at the moment I knew exactly what we had.  The tricky part was remembering who had what.  The handy timestamps on the e-mailed receipts came in handy.
Luckily we're still in tier 1.  I don't want to go back to remote drinking with friends.
No comments:

Can you feel the serenity

Yes, yes I can.
Spotted these two gliding along the Medway this morning during my morning walk.  Quite the contrast to what I was listening to.
I've got the audiobook of The Temple of Elemental Evil and a troll had just been lightning bolted in the forehead.
No comments:

As it's started to get a little colder Josie has started to drape herself on our Rayburn.  Not sure how she manages it as if you drop water on those hotplates they sizzle.  Each to their own I guess. 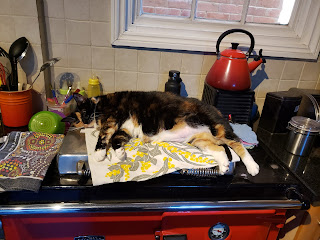 Please be my friend

There's a definite love hate vibe in the Clark house at the moment.

Poor Arwen only wants to be friends.
No comments:

Some friends recently recommended watching Social Dilemma (Netflix) and have now decided to stop using Twitter.  I'm not too worried about my information getting used it's more down to the social manipulation tactics they use to entice you to interact.

I wouldn't say I use twitter that often anyway, but it has become part of my morning ritual when I wake up.

I stopped using Instagram a few weeks back and Facebook a couple of years ago.
I think WhatsApp is the only one left.  But I think i'll keep it for a little while as I don't think I can go back to text messages just yet.
I will miss the funny cat videos, videos of people hurting themselves due to their own stupidity but not much else really.
No comments:

Here's our crazy dog Arwen giving me the run around

Wow! That's what he's been doing

I'm trialling Amazon Prime's music service so searched for one of my favourite songs,  the Sound of Silence cover by The Disturbed.  There it was including the original by Simon and Garfunckle.  To my astonishment I also found this version

Todd Hoffman is one of my favourite characters in Gold Rush which is one of my favourite shows.  He, and his family have not been in the last few seasons.  I mostly think it's down to them never making any profit.  But now it appears it's because he's pursuing his music career.
Anyway here he is belting out a classic.  Enjoy.

April's upstairs in the bath so watching Aliens with the dog. 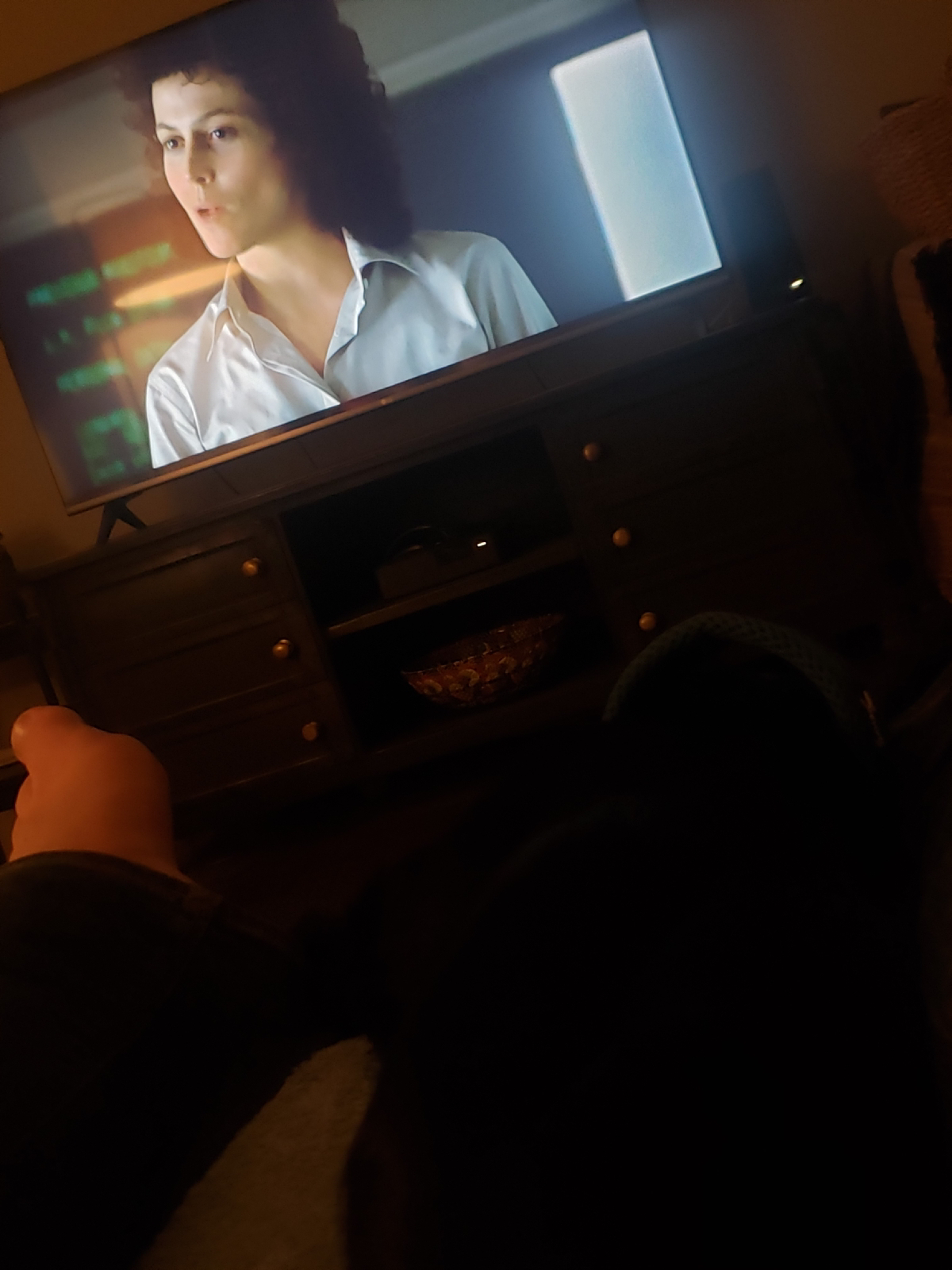 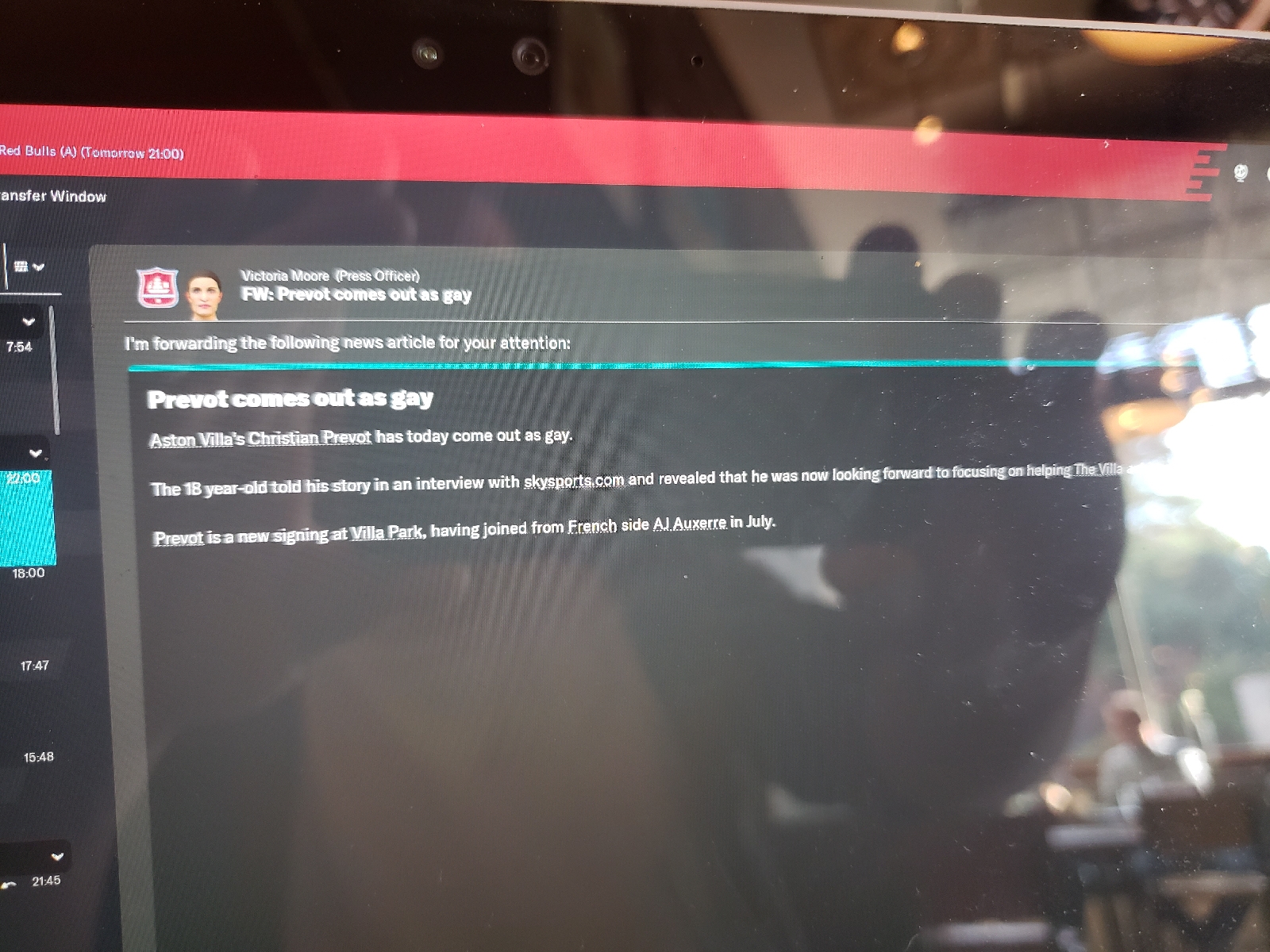 Interesting random event in my latest save. Not sure we're any closer to such an event in real life but every little counts.
No comments:

Well that was entertaining

April accidently let the dog out of the kitchen and she ran straight up the stairs to see the decorator and proceeded to dip her face in the paint.

Luckily it was water based paint and rubbed straight off.

Walking in the rain

April was taking Flo swimming yesterday so I went out in the rain with Arthur. 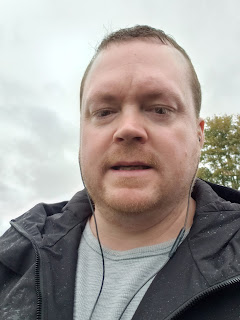 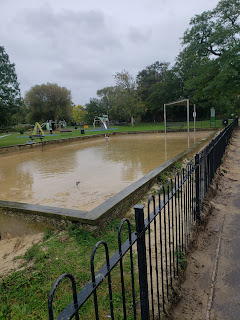 Here's Tonbridge's latest attraction.  A new outdoor swimming pool...  It's the kids sand pit in the racecourse.  Yikes.  Let's hope we don't have another flood.

Not one but two squeaky toys keeping me entertained whilst trying to work. 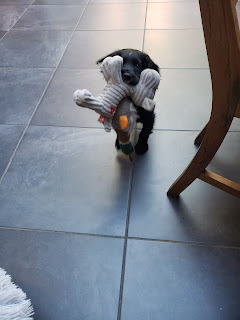 Will it ever end?

We have the final stage of the decorating project (started back in March) finishing today.  This is the friend of the carpet guy who's filling and painting the holes in the ceiling on our landings where the carpet fitters were too rigorous with their fitting and popped all the newly fitted plaster board around the screws that were used to fix them to the ceiling.

He's just knocked on the kitchen door to tell us that he's peeled back the masking tape and some of the paint from the newly painted walls has peeled off with it.  Urgh!  Luckily we have some paint left over somewhere so he's going to touch that up too.

Despite having recently finished my home office I have now been relegated back downstairs to stay with the dog.  The proverbial dog house. 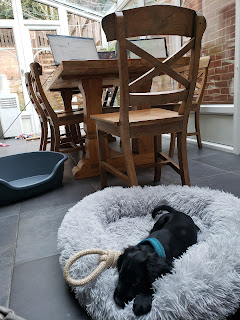 With April having to look after Arthur, I have to be responsible for the hound. 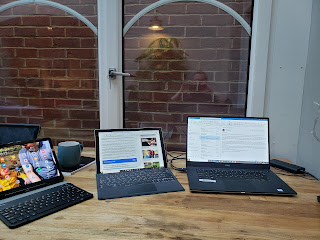 Now to put the heating on, it's bloody freezing down here in the kitchen.