The best of British

Trains are buggered. So what do we do? Go to the pub. Bring it on.

Just been kicked out due to a fire alarm. Luckily I wasn't in the shower... 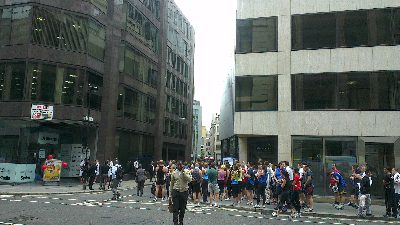 I expect a picture

I expect to see a picture!
No comments:

Driving back from Steve's 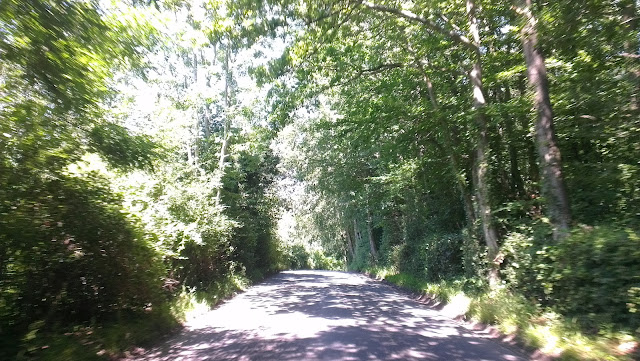 We were diverted driving back from Steve's last Sunday so had the roof down
No comments:

And I thought they hated each other 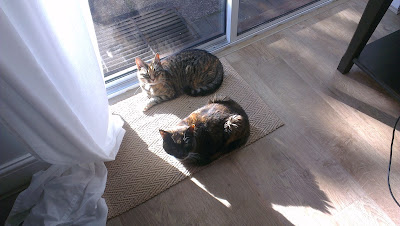 They love the sun and April's new mat more.
No comments: 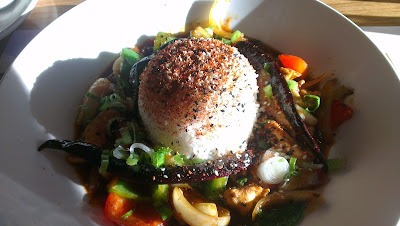 We went to Wagamamma last night before seeing Kevin Bridges at the Trinity Tunbridge Wells.  The Firecracker.  Those giant dark red things are chillies and the red sprinkles on the rice are chillies and there's a load of chilli in the sauce.  Ouch!  I won a pound off April though for  nibbling a bit of the chillies.  Big mistake.

Kevin Bridges was good too.  Very funny and made the most of the sedate Tunbridge Wells crowd.
No comments:

I lost one of my nice cufflinks last night.  Boo.  They were in my pocket (too hot) and it must have fallen out when I pulled my headphones out when waiting for my train.  Doh!

These were one of my leaving gifts for when I left Gallagher though.  Oh, well, i've got plenty of others.
No comments:

Too easy to twist my arm

That's twice in a row.  I'm supposed to be going pre-season training on Tuesdays after work but twice in a row my arm's been twisted and I go out for a drink instead.


It's the thought that counts though, and I did think I was going training.  Up until 4:30 that is.  And I have already been for a swim at lunch so it's not as if i've done nothing today.

Damn you weak will!
No comments:

I see your being a twat, and I raise you a sneaky password find

IT are about take away our ability to use USB sticks, I have trumped that by finding the password to our company wifi.

Don't let the system get you down.
No comments:

Marked improvement but no cigar

We went to a friend's quiz night at his home cricket club last night to help raise funds for the season.  And not for the want in trying we didn't come last as is usually the way.

We could have come first however if people checked the last question for me.

People were shouting numbers at me when I was totting them all up so when I went to the toilet I told people to check the sums as I was pretty sure it wasn't right.  They didn't check them, we lost 5 points instead of gaining 5 in the final question.  Doh!  We could have been 3rd with that.

Also, another question was to name the top 5 ftse 100 companies.  I named two of them and they were scribbled out and replaced with others.  Doh, Doh!
No comments:

Yum yum. After April's complaint letter for the last time we went the manager offered us a free meal.

Only downside was not making more of the opportunity. We turned down desert and more wine. Doh! 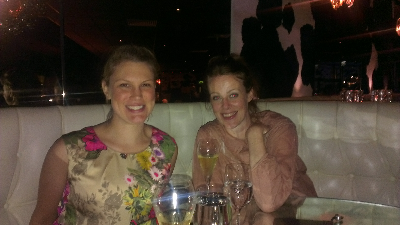 If I were ever to go religious 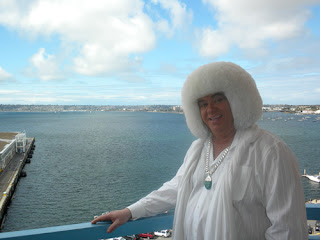 I would choose to go to this guy's church.
No comments:

Breakfast of the gods 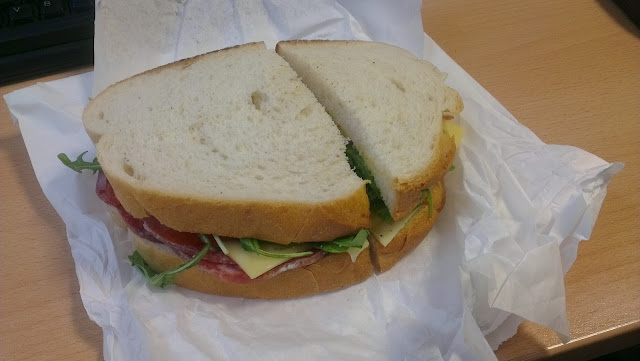 Here's one for Markus.  A salami swiss special from Basil's near Fenchurch Street Station.  It was my company's Summer party last night and I hadn't eaten anything since lunch yesterday so thought it would be for the best.

In addition to that we're having a leaving lunch here today
http://camino.uk.com/monument/about

Tomorrow we're off here for my Dad's 65th birthday
http://www.protorestaurantgroup.com/food/index.php

Sunday will be a day of fasting. And playing football manager.
1 comment:

A little bit of culture

April managed to get free tickets to the Taming of the Shrew (The Globe) from a friend at work that couldn't go.  And I was dragged along with her.

Just kidding I did want to go, and would say that I enjoyed it.  Although it was hard work and three hours is far too long.  I reckon I could have cut half the scenes out and I still wouldn't have had a clue as to what the story was about...

To begin with our seats weren't the best (10% loss) so you couldn't really hear all of it properly, there were a bunch of kids constantly nattering a few rows back (20%) which was annoying and quite off putting and to top it off it was almost in a foreign language (20%).  Towards the end I was beginning to get the gist of it but it was bloody hard work.

All in all a fun experience but far too long.  We're off again to see As You Like It with April's boss in September so the practise will be good. 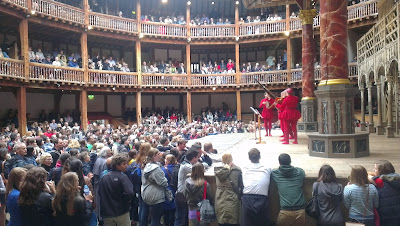 Letters of Note is an attempt to gather and sort fascinating letters, postcards, telegrams, faxes, and memos. Scans/photos where possible. Fakes will be sneered at. Updated as often as possible; usually each weekday.

Wesley Snipes was in the running for Geordi (Star Trek)
http://www.lettersofnote.com/2010/08/star-trekcasting.html
No comments:

We've watched the 1st two cds of the West Wing already.  It's tough to concentrate for so long in one session but it's the only way to get through it and follow it all.
No comments:

You know you're old when...

... entering your date of birth into an internet form and you have to scroll down for a minute before reaching the year you were born.
No comments:

Finally got round to watching the last few Deadwood. We made good progress a while back but for one reason or another we didn't get round to finishing. Verdict: very good, but left a little disappointed, if only HBO gave it another couple of series. Oh well.

I've started to watch Hell on Wheels too which is very similar but not nearly as good.

Talking about shows we're halfway through but haven't got round to finishing yet. Sopranos, Community and The West Wing (plus Battlestar Galactica for me).

All extreamly good but it's quite hard when we each have to be in the house at the same time for us to watch them.

And it's back on again

Not all of the beer festival beer was returned so my club's holding a smaller event inside this weekend instead. I'm still booked to help out this afternoon at 4. Followed by a lovely curry.

Thankfully I wasn't helping out last night as I was not feeling well after Thursday's antics. Urgh, I was well and truely hangover yesterday. I even only drank lemonade at the pub when we met up with friends for a quick drink.

Our IT department are removing our access of usb sticks.  Gits!  All of my spreadsheets currently sit on one. I don't really want to let them sit on my personal drive at work, so not sure what i'll do.
No comments:

It's our company's 50th anniversary today so we're getting a champagne reception at 4.

How lovely.
No comments:

Can you guess what it is yet?

Any ideas what the black joystick type thing is?  I bought a pack of accessories for my phone and it came with it.

It's a portable phone stand.  You stick it (suction) to the back of the phone and it props it up on your desk.

I don't use it for that though, I just stick it to my monitor stand and twiddle with it.  Preferably when no one's looking as they may get the wrong impression.
No comments:

I had a look round Waterstones near work this afternoon and who did I spot?
Esther Rantzen doing a book signing
No comments:

Due to the rain over the past few weeks (feels like months) the Tonbridge Beer Festival has had to be cancelled.  I was down to help out as it was at my local rugby club.  Don't think I was doing this out of the kindness of my heart, I was offered free beer.

Anyway, what to do on Saturday now?  The original plan was to help out from 4-7 getting happily drunk at the same time, then afterwards bugger off for a curry with friends.

I think we should hold our own beer festival.  It's pretty easy.  All you need is an assortment of beer.

Having missed the Welland Valley Beer festival I was really looking forward to this one.  Not to fear though, i'm off to the Great British Beer festival again.  They've changed it's venue slightly (Olympia) due to the Olympics but will still b good.  Roll on August the 8th.
No comments:

We saw Pappy's again tonight. Brilliant. It was more or less the same gig as we saw a few months back but was far more polished with lots of additional bits that added to the fun. If you're in and around Edinburgh during the fringe you must see them. I reckon we're up to 10 times so far. Very funny.

After that we tried to go to the new Sailor Jerry bar that was nearby. Sadly it was shut and gone. We only found out about it less than a month ago and now it doesn't exist. Doh. Luckily it was opposite the Crobar. My favourite bar, and as chance would have it was where we first randomly saw Pappy's.

After dragging April out of there we went to The Spanish Bar, according to Pete, the best juke box in London. It didn't. It also sported an irritating drunk Somali and an old drunk Irishman who claimed he was a gangster. I asked him how business was going and he said well...

All in all quite a fun night.

Really tired this afternoon, not sure what's wrong with me.  I was fine at the gym but hit a wall this afternoon I hope i'm not coming down with something.
No comments: 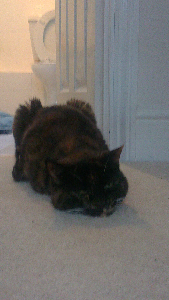 Watched the first yesterday.  Now for the next few.  I should be able to squeeze in a couple before April gets back from London and her band practice.
No comments:

We popped into Halfords yesterday to see if we could get a new DAB radio fitted.  After speaking with the chap and him looking through a big catalog it turns out we can't.  Doh.  A year earlier, yes.  2006 and onwards, no.  Our heating system is controled as part of the same console so it's a no go.

New car it is then...  Quite pricey for a new car radio.
No comments:

Thanks to Ben for routing out these gems!

Cat in a sink

Does exactly what it says in the title. 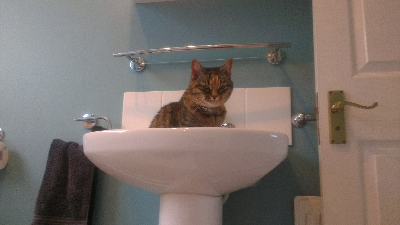 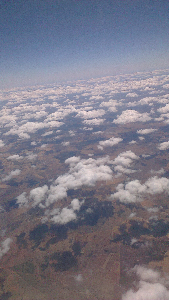 In a bar in Portugal, I think they'd just gone ahead on penalties in the semi final against Spain. 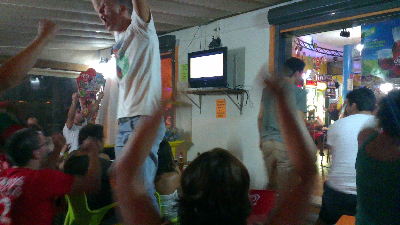 Did you miss me?

We got back from our week long trip to Portugal yesterday afternoon after a delay of around an hour in Faro. I think it'd been the longest time I'd been away from my laptop since I bought it over two years ago. Poor thing, it probably did deserve the rest however.

I think the cats missed us too, stupid things. We've found a nice cat lady that plays with them for an hour each day but i'm sure they still miss the warm laps and tickles. And for one in particular the extra food.

30,000 views of my blog since June '08. Not bad considering it's 99.9% rubbish. Watch this space for a new look blog. April's going to help me design a new one and I may even splash out on the domain name etc.