Flo woke me up at about 5:15 this morning, which is actually quite good.  She'd slept through since 7pm the previous day so a good night for Flo.  I got up and prepared her some milk, after that 9 times out of 10 she'll settle and we'll generally get another couple of hours before she wakes up again.

With it only being an hour or so before I'd need to get ready for work I decided it wasn't worth trying to get back to sleep so ended up running a nice relaxing bath.

10 minutes in the cat decided to have a shit in her litter tray (it's currently situated in the shower cubicle in the bathroom).  It stank so I had to get out of the bath, fish out the shit and flush it down the loo.

I got back in the bath.  10 minutes later Flo started chirping again.  I got out of the bath to see if a bottle of warm water would settle her, I opened her door to an ungodly odour.  She'd just had a shit in her nappy and was upset.  I changed her, put her back down and gave her the bottle.

10 minutes later April gets in the shower, Flo hadn't settled, Flo was still awake and had decided to throw her toys out of her cot.  Flo was annoyed that she no longer had her toys.  Flo started crying.

I get out of the bath for good.  Nice and relaxed
No comments:

Looking forward to the weekend

The weather forecast for the weekend looks great.  I've promised to open up the bar to a view friends in Tonbridge.  That of course means that I need to tidy it up first.

I did a couple of hours in there a couple of weekends ago so there isn't really that much to do.  I've just got to throw out a few moldy beer towels and give it a good airing.  I'm sure it will be fine.   Ill also give the bbq an inspection too.  Nothing like a good 20 minute blast of gas to kill any unwanted germs.
No comments:

So, i've been contracting for the past 7 weeks and everything is going well.  I've been paid twice and it's nice to have money coming into my account again.  An additional bonus is i've overpaid tax in my last place so am due a very tidy £6k once the dust settles.

I especially like it when I get paid to do a team away day.  We went over to Greenwich (next to the O2) for a spot of golf at a driving range.  Amazing views, right across the river from Canary Wharf. 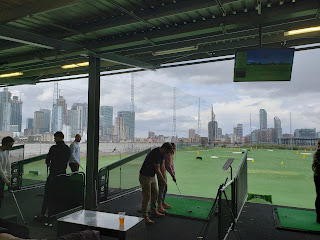 The most annoying part of the day was having to head back early to pick up Flo as April's away in Chicago for the week.

Another tough part of being a contractor is trying to resist spending all he new found money in my account.  I've twice very nearly bought myself a new £500 tablet.  I must resist.  I must resist.
No comments: