After a slightly longer than usual development period the Football Manager 2020 Beta has been released! 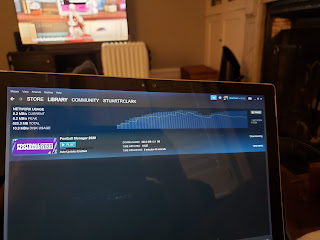 Alternate use of socks on their last legs 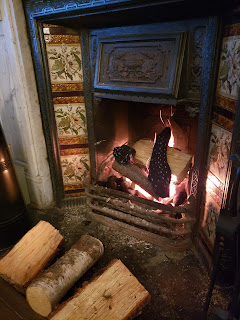 As far as i'm aware they're not bad for the environment.

Quite pleased with it

It's that time of the year 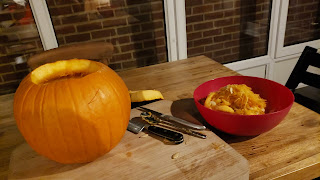 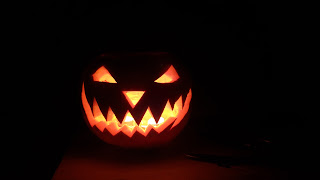 I joined a gym last week and popped along for a session today. It was great. Lovely and quiet. And every thing you need really.
Whilst I'm not working I need things to do during the day to keep me entertained. This is perfect.
No comments:

I had the rugby lads round on Saturday morning to watch the rugby.

What to do on Saturday though?  There's no rugby game for my team so there may be a team social event held.

Well, i'm now officially on holiday.  No work for a little while.  It's a nice feeling.  I imagine it won't be when I get to the bottom of my pot but I do intend to enjoy it whilst I can.

The first problem is the fact that I have to send my super computer back to the manufacturer.  The replacement ram doesn't work either so it must be something wrong with the mother board.  Grr...

I met up with Shaheen and Ross on Saturday. 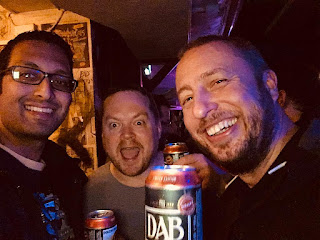 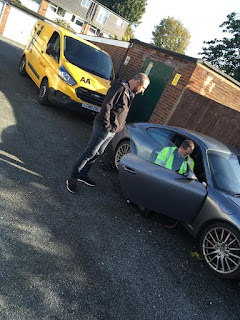 Except for Ross' car.  He left his lights on so it wouldn't start on Sunday morning.  Ha, ha.

April booked us in for another family photo shoot yesterday. 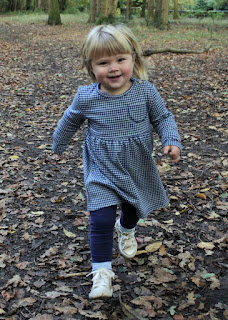 We lucked out with the weather.  A day earlier and it would have been a complete washout. 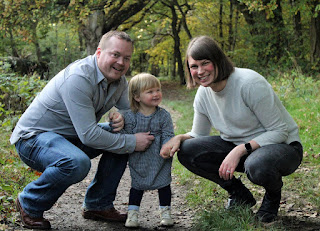 There are a couple of early ones before the photographer has a chance to photoshop out my belly.
No comments:

What's the fine if your police horse shits all over the pavement and you don't pick it up afterwards? 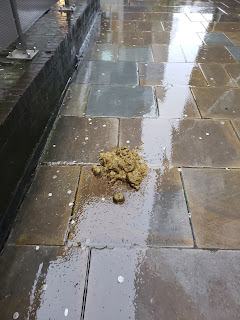 You'd have to carry a roll of bin bags and a shovel around with you.

Story of the day must go to this

One more day in my current position.  I have to say that i've really enjoyed it.  It's a good company and would certainly work for them again.

Now to find some more work.
No comments:

I won't be doing it again tomorrow 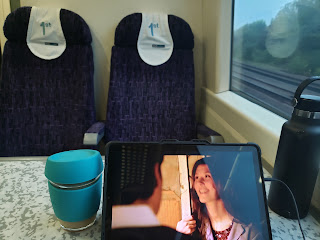 Didn't get that job

I had a hastily arranged interview with a managing agent regarding a short term contract yesterday.  I didn't get the role.  It's a shame as I like getting paid, but I really would like some time off.

It didn't start well when the interviewer turned up 20 mins late, I felt I did well in the interview but now it turns out they want someone with more reserving experience.  This could have been a lot simpler if they just read my CV.  Oh well, something will turn up. 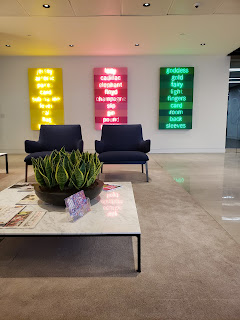 Here's a photo of their reception.  By the time the interviewer turned up I had all of the words imprinted onto my retinas. 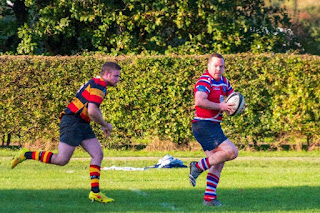 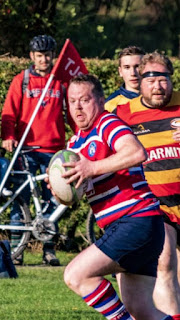 According to my birth certificate, 40.

But I feel a lot older.

According to the Q awards a song called Video Games (Lana Del Rey) is the top song of the past 10 years.  I've never heard of it!!!  Or her.

I've listened to it now and it's okay.  Is that really the best song???  Saying that, I can't name a better one as i'm an old bastard and only listen to the old shit that i've always listened to.

For some time now i've had an overload of podcasts.  Here are some of my subscribed casts.  Athletico Mince is by far and away the best and generally listen to that as soon as it's released.

I have a 10 minute walk to the train in the morning, followed by 10 minutes to the office at the other end.  So that's 40 mins a day, 5 times a week. 3h20m total per week, but I must have up to 10h of new product each week.  There are some that i've just had to cull, some I have to be more selective with.

I'd love to be able to listen to them at work but don't think I can concentrate enough on work whilst doing it.  I sometimes just put my headphones on with nothing on, but that's just to tone down the general office drone when I have to focus on a particular task.  It also has the benefit of putting people off asking questions and putting you off your stride.

When i'm off work in a week's time I may get a chance to catch up.  I have 55 recordings outstanding.


I've just swapped some ram with DPD, let's hope it works when I get in tonight. 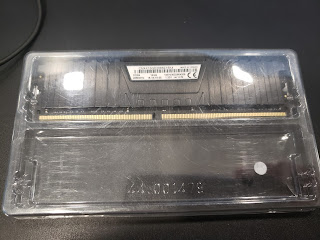 In preparation for next month's release

I bought a new mug 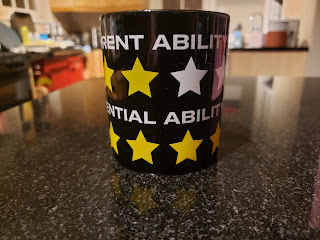 I've been testing my new PC (not as much as i'd like) over the past week and it hasn't crashed so I think we've identified the issue as a faulty ram chip.  A courier is due to pick up the faulty chip tomorrow at whilst i'm at work and replace it with  a new one.  Let's hope it works when I replace it at the weekend.  Otherwise it's a motherboard issue and I think i'll just send the whole thing back.

I can now play Total War Warhammer 2 without the surface struggling.   I've also tried Pillars of Eternity II and Battletech with the new graphics card and they all look wonderful.  I re-installed Fallout 3 (New Vegas) and Skyrim last night (April was out) and gave them a whirl but don't think I have the commitment to play through them again.

There are 2 or 3 other games that I own on steam that i'd like to revisit now that I have a computer able to run them but I'm now also looking for a new game to play (before the new FM release next month).

I'm also interested in running a game through the PC as a host and playing it downstairs on my laptop.

The fun i'm going to have whilst unemployed (6 work days left of my contract!!!)
No comments:

My monthly season ticket runs out tomorrow so I will need to buy a weekly, then 2 singles to last me up and till my contract runs out.

I've just had a look and it's only an additional £8.80 per day to go first class.  I think I might just do that. 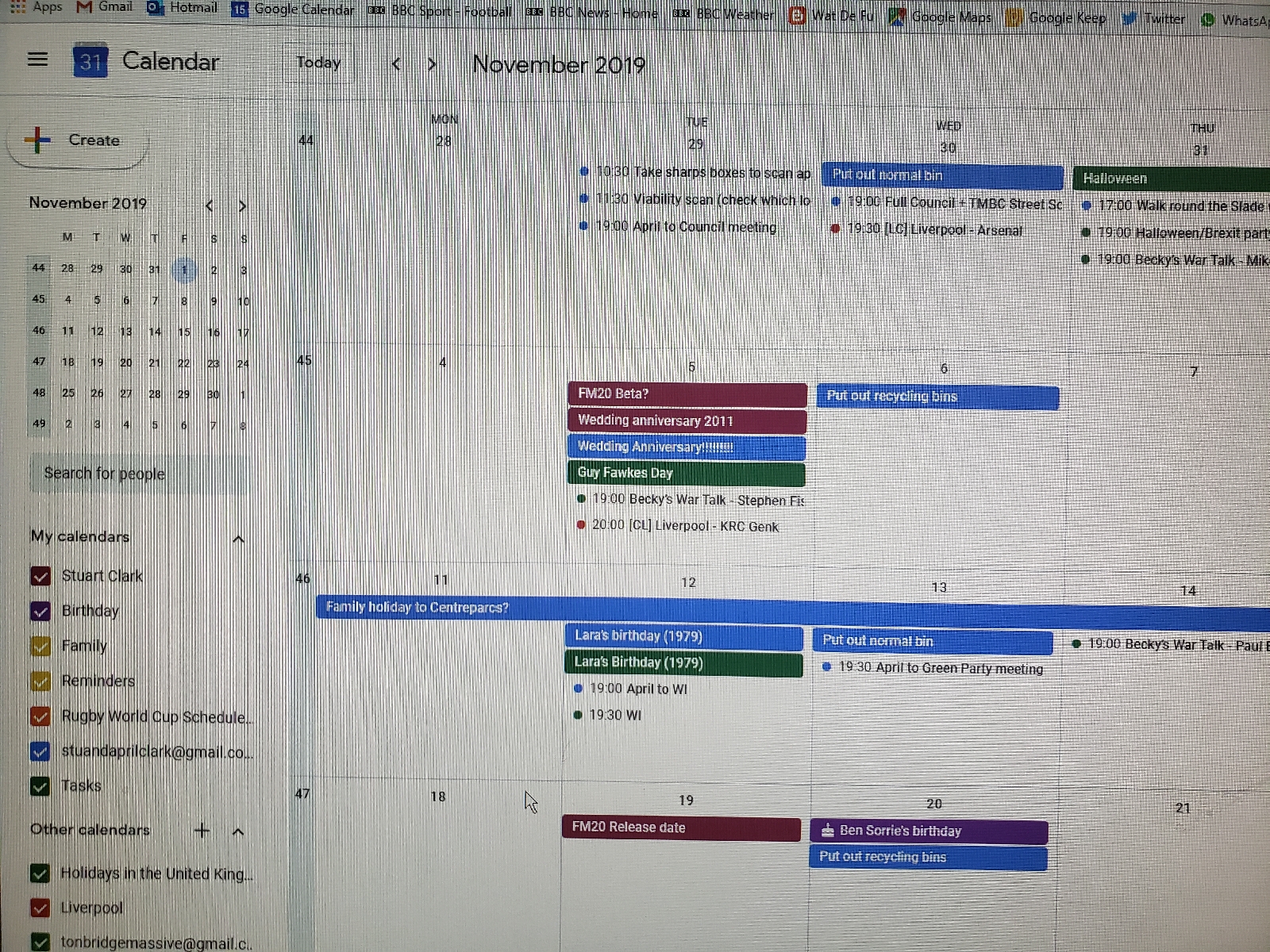 The beta for new Football Manager game is due 'circa' 2 weeks before the official release date of 19th November. A bit later than usual but great!

Only problem is its on the 5th. Our wedding anniversary.
2 comments: 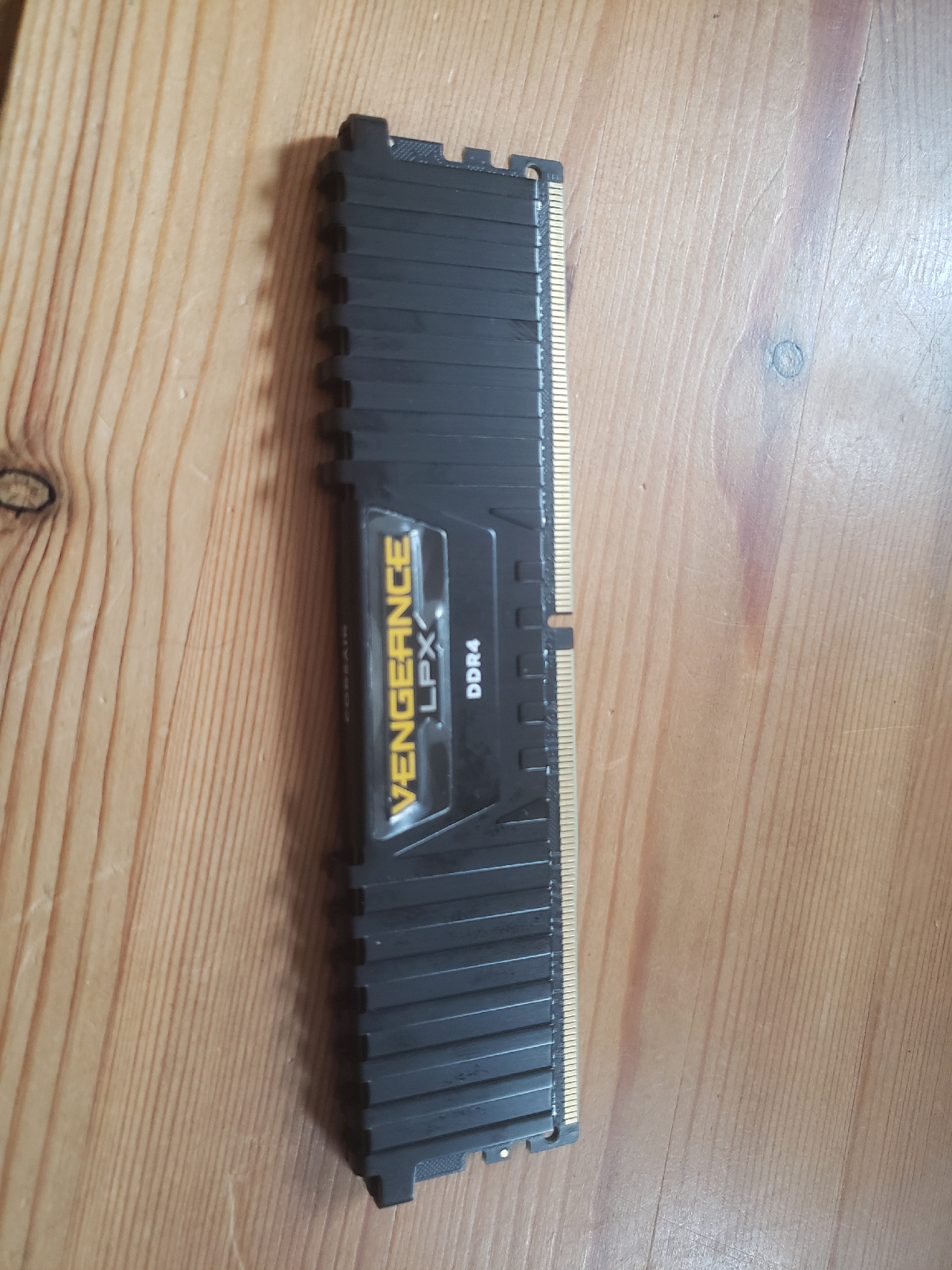 We had friends and family round yesterday to celebrate Flo's 2nd birthday.  Here's a photo. 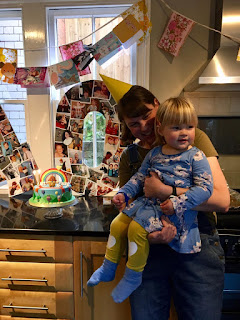 If you look closely there's my 40th birthday photo board that April made.  If you look REALLY closely you may be able to see a photo of me naked as a child.
No comments:

I've had some problems with my new PC since it arrived last week.  Basically it keeps crashing 5 mins into a game.  I spoke to the tech guys and after a bit of digging suggested it could be a problem with the ram.

Rather than sending it back for them to take a look at I had to take sticks of ram out individually to work out which one was causing a problem.  I've done this and it's running smoothly now which is great but I will have to send it off to get replaced.  One thing I need to test is if I move a working ram card into the slot where the faulty ram was removed.  Will it still work?  Then it would be a problem with the mother board.  I'll do this tonight to confirm then speak to the guys tomorrow.

I guess i'll have to make do with 32gb of Ram for the time being!
No comments:

I am officially old and middle class.

Yes, you've guessed it.  We've booked our first Center Parcs holiday.  My contract finishes at the end of the month and although there are a few opportunities that my hat has been put in it will be nice to have a short break with Flo and April.

I've only had one holiday this year and that was 3 days in Whitstable. We're going to Longleat.  Flo will love the animals, and there will be plenty to do in the park itself.
No comments:

It wouldn't be a gig without taking a couple of photos. 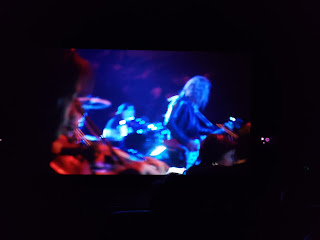 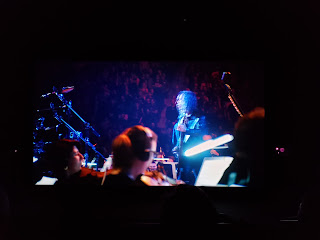 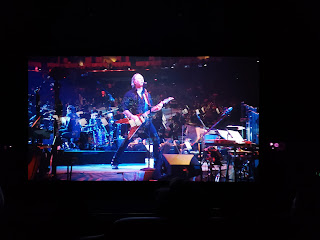 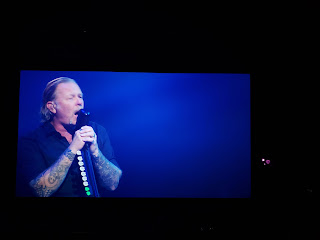 This was in the cinema though (sorry Lars). 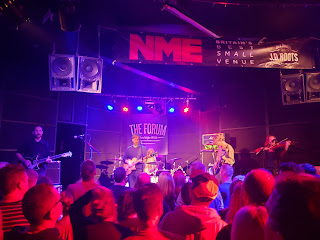 Here's a photo from Tuesday's gig, British Sea Power.  It's not really my thing but they were very good.  It's always nice to see bands in small venues.

IT'S ARRIVED! (said in the maniacal voice of Victor Von Frankenstein)

My PC has been safely delivered, I won't get to play on it properly till Thursday though which is a shame.

I'm out at a gig later tonight and my daughter selfishly has her 2nd birthday tomorrow so we have the day off.  She said she'd rather feed the animals at the farm than help Daddy unpack his PC.  Also late afternoon i'm back in London (Hither Green) to meet up with Shaheen.  We're off to see the Metallica San Francisco symphony orchestra film. 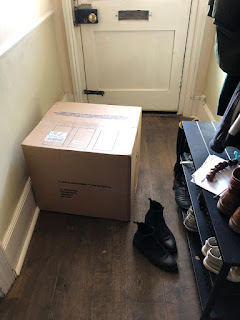 April can't lift it which is a good sign. 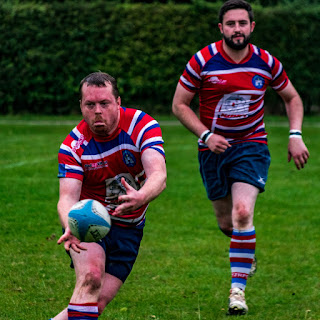 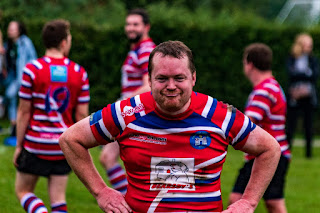 The bad (and the ugly)

It was due to get delivered on Monday but as nobody would have been at home to sign for it, I'll now get it on Tuesday.
No comments:

New PC should arrive on Monday!

It's passed all of it's tests and is now with the delivery firm .  I was hoping they deliver over the weekend but looks like that's not the case.

Saying that not sure when i'd get a chance to play with it.  I've got a busy morning on Saturday then rugby in the afternoon.  Followed by visiting my parents back home on Sunday for most of the day.

3 weeks left of work though so at least i'll have something to do when i'm unemployed!
No comments:

I lost a few kgs last year in Chicago, I think mostly down to the amount of miles I walked pushing Flo around in her pram all day.  I think i've now put most of it back on.

I can certainly feel my trousers a bit tighter and this morning I burst a button off my suit jacket.  Doh!

Time for a bit of a diet?  Or more exercise? Well, that was quick

My new PC has been built and is now in testing!!!

I did however spot one error in my order (my fault) I bought 2 solid state drives rather than one solid state and a second bigger normal hard drive.  Doh.  I think the error cost me an additional £200, oops.

I'm guessing I could even get the PC in time for the weekend.  That will be nice.
No comments:

I finally did it

I ordered my work PC yesterday afternoon.  I should get it within the week.  In order to get the VAT back it had to cost over £2000.  In addition to that I also don't pay corporation as it's an expense and effectively no income tax too so it would be rude not too...

Now to notify the electricity provider that they may have to tap into the auxiliary power stations.
No comments:

Saw this on the train home from work on Monday. 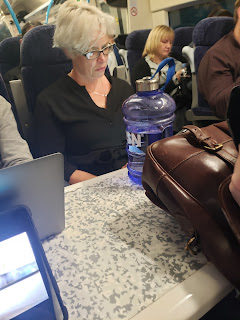 I know we're all supposed to drink more water but imagine getting stuck behind her in the queue for the water cooler.  It's at least 2 litres!