Not sure why the new heating system needs a lightsaber 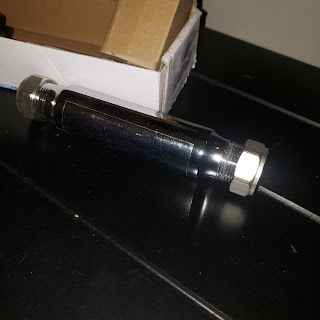 They've started work on replacing our hot water and heating system this week and spotted this.  Looks like the casing of a lightsaber.
No comments: 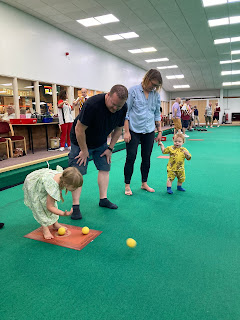 We had another go at indoor bowls on Sunday.  The bowls club last held an open day a couple of years ago and we went to that too.  It's a lot of fun and the kids loved it.
No comments: 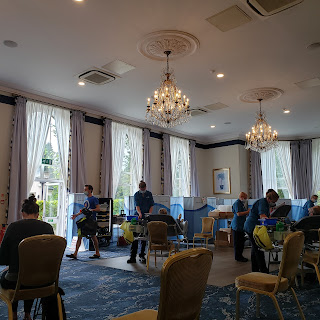 My last few blood donations have been in a Tonbridge sports hall.  My latest was in a Tunbridge Wells spa hotel.  A slightly different experience.
No comments:

We've got a Nanny for two days a week starting today.  A lovely Italian lady called Serena. It's roughly the same cost as putting two kids through the nursery but means that it will break the week up a bit for Flo and Arthur.  They both enjoy the nursery but with Flo having to do another year whilst a lot of her friends who were born before September have gone onto the big school think she might get a little bored.

We're due to replace our old Rayburn with a new modern gas boiler.  The boiler is going upstairs in the top loft, the washer and dryer are going upstairs in a refurbed bathroom.  They're due to start work in a week and a half.  Fingers crossed they're finished before the next stage gets done.

This part seems to have taken ages but we're finally up and running and this is all due to start on the 1st November.  If everything goes to plan (which it won't) it will all be done by the end of January.  We're all signed up and have decided to get our kitchen made with the same company.  Although we had our heart set on a Neptune one.  This is around a £15k saving so will give us more than enough money for the juke box we've got our eye on.

This may have to get postponed for a little while but by getting the cheaper kitchen means we could stretch the budget and get it all done in one hit.  Most of the builders we've talked to don't want to touch it as with access being so poor it would take a lot of manual labour, our current builder doesn't seem too phased but there have been some disagreements with the structural engineer that might need sorting before work can begin.

Being so close to the castle means we've had to engage with archaeologists.  If they find anything it's mine! Otherwise that's another £2k we'll never see again.

After a busy couple of weeks things have begun to calm down at work.  There's a big deadline for next week and our validation report has gone to the risk committee for review and sign off tomorrow.  Deadline is Monday afternoon so in really good time.  On Thursday I start look at the new syndicate and working out how on earth to validate that.  There's no historic data more most of the classes so I think we're just going to have to make it up.  Or as they call it in this business expert judgement.

They've mentioned again that they want to extend my contract which is good.  It's a nice company.  If only it was outside IR35.  I've got to pay employee and employers national insurance plus pay tax on a PAYE basis rather than through my company.  Shame.

The way I look at it though, is I get paid far too much anyway, i'm hardly poor.

I had to pull Arwen out of the river last week. 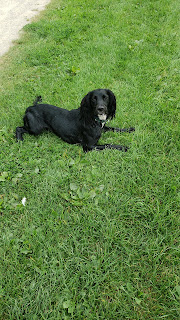 She'd fell in whilst taking a drink.  Stupid dog.
No comments: 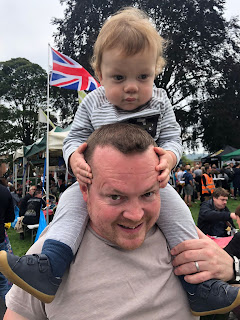 Arthur's just about big enough to ride on my shoulders now. 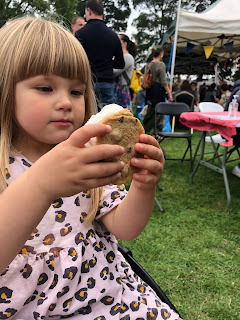 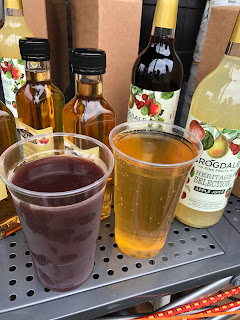 The real reason we were there
No comments:

Finally get to test my two main birthday presents 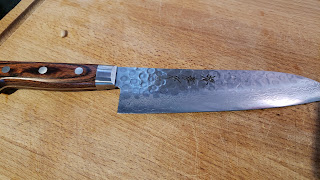 Fancy Japanese knife, and I didn't cut myself

Meat probe, what's not to like about a probe? 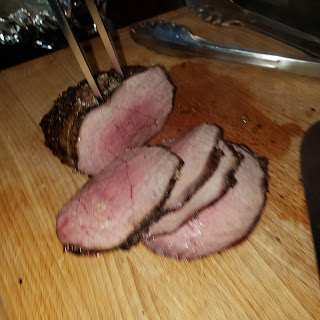 Thinnest beef i've ever been able to carve

After a lot of pestering I eventually went lake swimming with my friend Lesley and (pictured) Glenn. 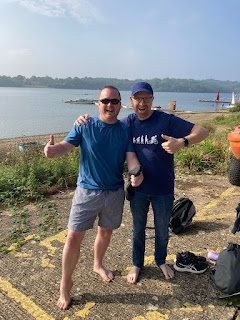 Here is the before shot at Bewl Water.  We were reliably told that the water temperature was 19C, I can categorically tell you it was closer to -19C.  Once over the initial shock and actually swimming, it was quite refreshing though.

The course was only 400m and I think I could have done it again.  Maybe next time.