Last night my local game group created our characters for Vampire the Masquerade (5th ed).  We didn't get to do much other than that but it should be fun.  Rombardo Lazerous makes another outing, this time as a vampire.  I've played the game before briefly when we were much younger (15 or so), but it didn't really catch on so we reverted back to other games.  I've ordered 10 blood dice (D10s) that the group can share for when hunger takes over.  I might need to order some more. 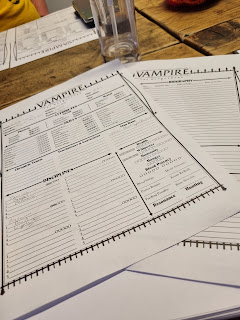 In other role playing news, one of the barmen at my local pub also plays and wants me to play in one of his games.  Unfortunately I just don't have the time or more importantly the commitment to play a second weekly game so had to decline.  There was another barmen at another pub that also plays but he's since moved over to Bristol.