It's our 9th wedding anniversary today so we had to move our fancy meal out to Tuesday.  Luckily my mum wasn't doing anything so came down on Tuesday afternoon instead too.  Here's the menu 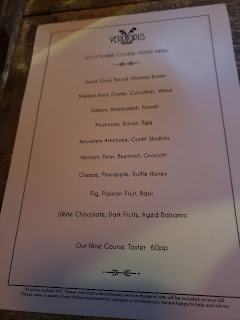 I had to explain what a 'dutch oven' was to April.  Well.  It made me chuckle.
As an added bonus I have put it through my company as an annual event. Who says romance is dead?You're allowed an event each year for each employee and their partner for up to £150 each.  April chose some very expensive Margaret River wine (Near where she's from in South West Australia) so we very nearly made the £300 target, if it wasn't for the 10pm curfew we would have made it.  However the trick is to get it as close to £300 as possible, any over and it would have counted.