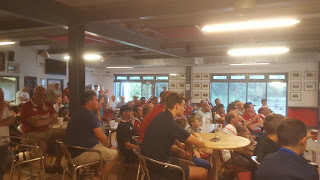 Very busy.  I reckon 40% were having a beer at 9am when the bar opened.  Me included despite saying I wouldn't.  A team mate bought a jug so it would be rude not to help him out.  Ended up finishing drinking for the day at 1:30 the next day.  Only 16.5h drinking.  Urgh.  Felt rotten during the drive into London the next morning to visit my old flat mate.  Luckily we were early which game me a little time to walk it off.