Up early this morning 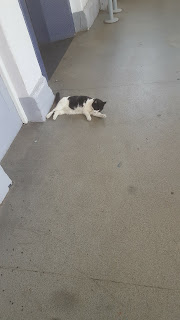 I had a 08:30 hygienist appointment in Kings Cross this morning so caught he 7:11 train.  I usually get the 8:26.  As we were approaching Sevenoaks an announcement was made that the train was going to be delayed and also diverted due to someone being hit by a train. I had nothing else to do but go into work early.  Urgh.

I ended up having to cancel my appointment which cost me an additional £20.  Even worse, the next appointment they had available was even earlier 08:00 on Monday.

I least I got to say hello to Saffie the station cat on the way in.