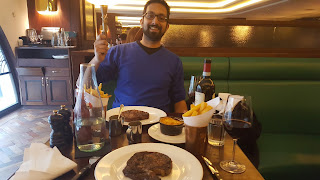 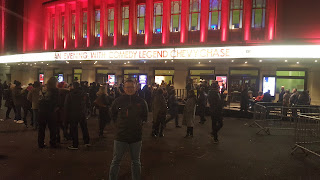 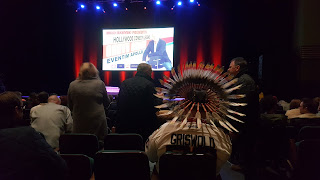 I wasn't sure what to expect, was he going to do stand up, was it a Q&A?  Nope, in the end it was an interview.  I'd seen similar things before so was excited to see who they'd get to interview that legend that is Chevy.

When the lights dimmed and the announcer announced Mike Read my heart sank.  Only for it to sink further when he channelled his inner Partridge during the interview.  It was terrible.  And the worst part of it was that it wasn't quite terrible enough for it to be funny terrible.

Chevy tried his best to answer the appalling questioning technique, Read had done the bare minimum amount of research on Chevy Chase that I can only imagine he was brought in at the last minute.

The best laugh of the night was when one audience member should out during one of the many awkward pauses.  "Mike Read, you're a twat".  I think that also go the biggest applause.

Urgh.  Oh well.  Kris, you did well ducking out of this one.

It's been rewritten now but this made me laugh. 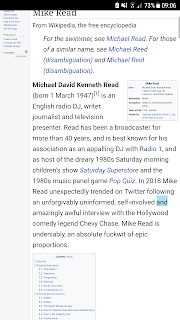